Hit enter to search or ESC to close
MBC News

Morris Brown College’s Board of Trustees has named Kevin James as the school’s interim president. His first day on the job is March 1. James has worked at other Historically Black Colleges and Universities (HBCUs), including Claflin University in Orangeburg, SC. He also attended South Carolina State University, an HBCU south of Columbia, S.C.

Morris Brown has a storied history. It still sits at the Atlanta University Center, alongside fellow HBCUs Spelman, Morehouse, and Clark Atlanta. It’s the oldest HBCU in Georgia founded by African-Americans, specifically members of the African Methodist Episcopal Church.  At its peak, Morris Brown enrolled about 2,500 students. The school’s graduates include a Rhodes Scholar and Pulitzer Prize winners. But the school started to suffer after losing its accreditation in 2002.

Colleges and universities need to be accredited in order to receive federal student aid money.  That loss of income led to a steep decline in enrollment. Morris Brown has remained unaccredited since 2002. James estimates the student body is around 40 students now.

But he has big plans to change Morris Brown. 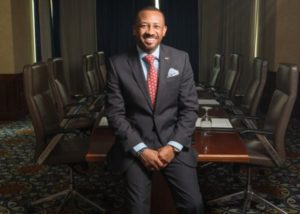 “My focus is on regaining our accreditation,” James said. “We’ve decided that we’ll move in a new direction and we will submit an application to TRACS, the Transnational Association of Christian Colleges and Schools.”

Morris Brown was previously accredited through the Southern Association of Colleges and Schools (SACS). TRACS is a smaller accrediting agency with fewer member schools. There are signs that the strategy could work. Paul Quinn College, an HBCU in Dallas also affiliated with the AME church, lost its SACS accreditation in 2009. Its new president, Michael Sorrell, applied for accreditation through TRACS. The school regained its accredited status, which led to its revival. James seems to be hoping for a similar result for Morris Brown.

“Becoming accredited with TRACS is a high priority, as well as stabilizing the university, raising money, dollars that we’re going to need to be able to number one: operate and number two: to be able to show our school stability,” James said.

He knows it will be a heavy lift. Morris Brown has eked by without accreditation for 17 years. James credits the school’s founding body for that.

“A huge component of why Morris Brown has not permanently closed its doors is the support of the AME church,” he said. “It’s critically important.”

James has at least one supporter who is sure he’s the right person for the job. Mary Beth Gasman is an HBCU expert and director of the Penn Center for Minority Serving Institutions at the University of Pennsylvania. She says James can lead Morris Brown in a new direction.

“He has business contacts, he has religious contacts, he has education contacts, and the number one thing he has that I think is really important is: he has energy,” Gasman said. “He is energetic, he’s excited, and he’s really passionate.”

James has already revealed some of that excitement through social media. He’s started two Morris Brown-related Twitter hashtags: #restoremorrisbrown and #thehardreset. Gasman says rebranding efforts like that will be key to the school’s success. She believes James is committed to changing Morris Brown and moving the college forward.

“I think he’s less about the pomp and circumstance, and more about, ‘Let’s just make this work,’” she said.

Correction: This report has been corrected to show that Kevin James attended, but did not earn his bachelor’s degree from, South Carolina State University.